If you installed OpenExchange apps in SDL Trados Studio 2014, you’ll be wondering if they’ll work in Studio 2015. Some will, some won’t and some aren’t even necessary any more.

Apps integrated in the core product in Studio 2015

Three apps from Studio 2014 and earlier are now automatically installed with Studio 2015, so you don’t need to transfer them at all:

Updated apps on the OpenExchange

For all other apps, go to the OpenExchange and download the updated apps for Studio 2015. Right now (August 2015), 38 apps have been updated, including the ApSIC XBench plug-in, Glossary Converter, SDLXLIFF Toolkit, SDL Number Verifier and Web Lookup.

While you’re there, why not check out all the apps that work with the latest Studio version. Click on Search and select SDL Trados Studio 2015 from the Product drop-down list: 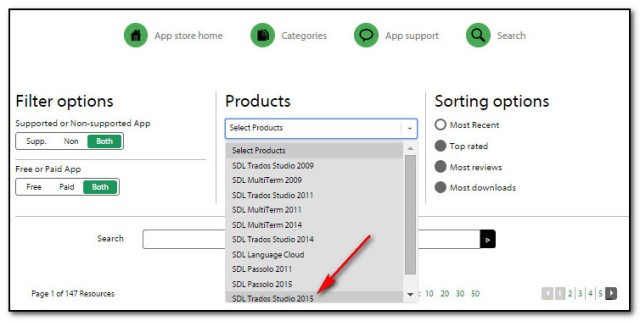 If you’re looking for a specific app that isn’t in the 2015 list, navigate to the Studio 2014 version, click on ‘Support and Developer Contact’ and ask the developer if a 2015 version is in the pipeline.

As a last resort, you’ll find that some of your Studio 2014 apps will still work. This is more likely if you’ve still got Studio 2014 installed on your computer.

An example of a 2014 plug-in that will work in Studio 2015 is Regex Match AutoSuggest Provider. But you’ll need to have both Studio versions installed on your computer.

Most standalone apps will work with old and new Studio versions alike. If your favourite app hasn’t been officially updated, just give the old version a go. It may well work.

Examples of standalone apps from Studio 2014 that will also work with Studio 2015 are PackageReader, SDLXliff2Tmx and SDLTmFindVars.