Posted on 12 September 2017 by Emma Goldsmith

Last month, the European Society of Cardiology (ESC) held its annual congress in Barcelona. Some 30,000 specialists attended over five days to discuss ‘Innovation in Cardiology’ 40 years after the first percutaneous coronary intervention. My colleague, Jane Marshall, and I went along to hear about the latest in cardiology guidelines, drugs and clinical trials.

Jane has kindly agreed to write up a report of our visit. Over to you, Jane: 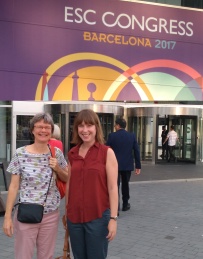 As one of a team of translators who regularly works with a cardiology journal (Emma being another), I had already looked at several cardiology events, but so far had not made it to any, so I was excited to see that the ESC conference would be in my home city of Barcelona and took the chance to go. Thousands of attendees seemed to arrive at the same time on Saturday, and with multiple sessions on offer, the first day was a little overwhelming, but the conference app was very helpful for choosing which sessions to attend and figuring out how to get there, as the venue was appropriately huge.

I opted for an easy start: a quiz! Two teams of cardiologists answered questions on recent cardiology guidelines, talking though the right and wrong answers with input from the audience at times. It was a great way to keep things fun without going off-topic, and I wondered if it’s something that could be adapted for a translators’ conference.

Meanwhile, Emma had been to a symposium on the GARFIELD-AF (Atrial Fibrillation) registry. Afterwards, she reported back on the fascinating ‘obesity paradox’, whereby obesity is a clear risk factor for AF, yet obese patients had the lowest mortality rate over a two-year follow up. She was also impressed that one of the speakers, Lorenzo Mantovani, stressed the linguistic importance of distinguishing between ‘complicated’ and ‘complex’: a case is complex because it involves different comorbidities interacting with one another.

Day two had a wealth of interesting and relevant sessions, including “Crunching the numbers: how to critically analyse a clinical trial” on trial design and statistical methods. This was a nice mix of things I already knew (reassuring!), new insights, and a few parts that were over my head. One of the speakers recommended a course on designing and interpreting clinical trials, which I think could be useful for those involved in medical writing, but since I’ve already booked up all my conferences and courses for 2017 it will have to wait.

I recently worked on a writing project that involved researching the effects of pollution on the body, so “The impact of air pollution on cardiovascular risk for adults” caught my eye in the programme. Clearly, exercise is good for cardiovascular health, yet we now know that pollution is not. One of the suggestions made was that those with existing heart disease who live in polluted areas should avoid exercising outdoors on days when the pollution level is high. I wonder how such recommendations might evolve in the coming years.

I dropped in on “Social media for cardiologists”, to see if the advice differed from that in translators’ groups. Some of the common-sense tips were similar: don’t over-share personal information, maintain the same level of respect for colleagues as you would in real life when initiating conversations, handling disagreements, etc., but there was more focus on using social media to raise the profile of research. This topic came up again in a session led by journal editors where they talked about altmetrics (or “the donut”) – alternative ways of assessing the impact of an article besides citation alone. Perhaps other professional editors are already familiar with this, as the concept has been around for a few years, but I was interested to hear that it is essentially an assessment of all the attention an article gets, including downloads, newspaper coverage, and social media discussions.

The role of professional editors and translators

The journal session was so valuable that I made sure to get to all the similar sessions (there were several). In one, I was pleasantly surprised to hear the editor, when asked about how things are likely to change in the future, say that he envisioned more articles being published in different languages besides English. In another, the issue of non-native writing in English was raised again, and (happily) the editors encouraged authors to use professional language editors and translators. With all the talk of languages, I began to feel less of an outsider and more of an expert!

Hot off the press

While the journal sessions were definitely the most relevant to me, some of the clinical and research sessions were interesting out of mere curiosity. In “late-breaking results” on day four, the PURE study was presented by Dr Mente. This huge multinational nutritional study has adjusted for just about every confounding factor you could think of, very encouraging to see in an area that can be difficult to assess.

I didn’t set out to get new clients, but I did have an interesting chat with a representative from a company that writes patient information leaflets, in multiple languages. Since I was genuinely interested in the process it was an easy conversation, and I think she was glad to have someone to talk to! We exchanged details, and while I’m not expecting any work from it, it was a positive interaction with a stranger from the “industry” area that seemed to be full of drug and device reps.

I could say much more – on the incredible video sessions with live images of cardiac procedures streamed direct from hospitals, or the regulatory talks on medical devices, or the variety in quality and subject matter of presentations, but let´s not get carried away! Would I do it again? My initial uncertainty quickly faded and now I’ll be keeping an eye out for upcoming conferences. Have you been to any non-translators’ or editors’ events? Are you planning to go to any? Let me know below.

Jane Marshall is a medical translator, editor, and writer, based in Barcelona. Having left behind a clinical medicine background she particularly enjoys working on research articles.

This entry was posted in Medical and tagged conference, CPD, medical translation. Bookmark the permalink.