Statistics One: A half-way report

Posted on 26 September 2012 by Emma Goldsmith

Having completed the first half of the Statistics One course, here is an interim report on how I’m getting on. As I mentioned in my post about Statistics for Translators, this is a free, 6-week, on-line course organised by Coursera, a company that partners with universities to offer MOOCs (Massive Open Online Courses).

What have I learnt in the first three weeks?

Theory: We’ve been taught how to calculate Z-scores, variance in a sample, percentile ranks, correlations and single/multiple regression coefficients with algebra, using matrices and by writing scripts in “R” (see below).

Practice: These concepts have been applied in medicine and psychology. The great thing about this course is that it’s given by a psychologist, Professor Andrew Conway, and so many of the examples are related to the fields I work in. For example, Prof Conway explained bias, percentile ranks and parallel tests by comparing an ordinary clinical thermometer with an infrared temporal artery thermometer, which tends to over-estimate body temperature. He then talked about the ImPACT study (Improvement in Memory with Plasticity-based Adaptive Cognitive Training) and applied it to scatterplots and correlations.

Not all examples are medicine related, however. We’ve also had a fair dose of baseball data (with a baseball glossary thrown in for those of us who aren’t in the know) and some virtual wine tasting too.

New ground: “R”, an open-source programming language and statistics package, has been completely new to me. We’ve been shown how to write scripts in “R” to plot data on histograms and scatterplots, and draw regression lines. Calculations, which are very tedious with a calculator and a bit laborious in Excel, are lightning fast in “R”. It’s got a bit of a steep learning curve but it’s been great fun to work out different functions and see the results.

To show what I mean about the satisfaction you get from writing a script and then running it, here is one of my attempts from Week Two and the resulting graphics. 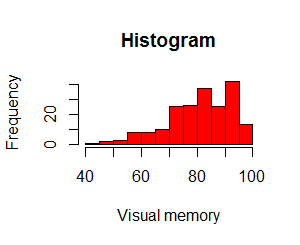 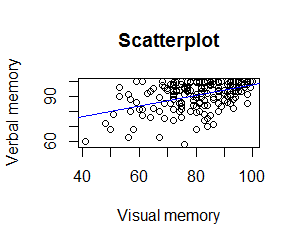 How much time am I actually spending on the course? The website specifies a workload of 4-6 hours per week, but I’m doing almost double that, considering the hours invested in getting to grips with “R”. The course website said that the six weeks would be a “friendly introduction  to very simple, very basic, fundamental concepts in statistics”, but I don’t agree. It’s proving to be extremely challenging. With over 75,000 students enrolled on this course, I suspect that the drop-out rate will be pretty high.

Can you still sign up? Although we’re half way through, it’s not too late to enrol on the course. There’s no certificate of completion, so you won’t miss out if you follow the course in your own time. You won’t be able to submit the quizzes or data assignments that are set at the end of each week if their due date has expired, but you can still watch the video lectures, download the data sets and learn all about writing scripts in “R”.

1 Response to Statistics One: A half-way report