SDL Trados Studio 2015 has just been released. As a beta tester, I’ve been trying out the new version for a couple of months, reporting bugs, discussing improvements with the developers and other beta testers, and enjoying seeing new features in action in real-life projects. Here’s my account of the new features in Studio 2015.

In the next blog post: New features for advanced users

Even if you’ve never used Studio before, you’ll be familiar with the concept because it comes from Microsoft Word.

AutoCorrect will correct your typos, so teh will be quickly replaced by the. TWo INitial capitals will turn into Two Initial capitals. a forgotten uppercase at the start of a segment will be automatically capitalised, and if you leave the cAPS lOCK key on by mistake, Studio will correct it for you.

To enable these settings, go to File>Options>Editor>AutoCorrect: 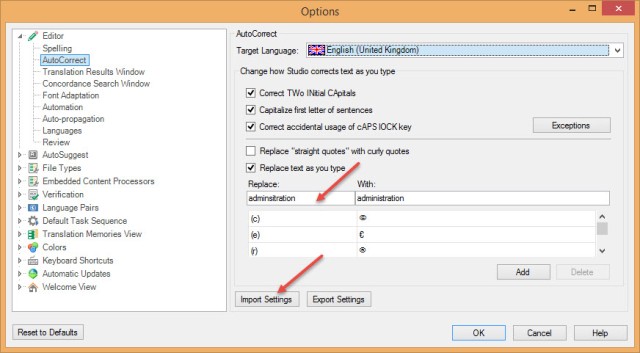 You can also add words that you often type incorrectly. The first I added was “adminsitration”; it’s a word I’ve written wrongly on and off for about 20 years. How nice to have Studio correct it for me at last.

Don’t forget that you can also use the “replace” box as a shortcut for commonly-used strings or terms. I’ve added “EMA”, which Studio now replaces with “European Medicines Agency”.

Dragon Naturally Speaking users will be pleased they no longer have to say “Cap” to capitalise the first letter of every segment. Studio now autocorrects it as you speak!

A big thank you to SDL for finally listening to its users. (We’ve been asking for this feature since 2009.) Not only is it better late than never, AutoCorrect is actually my favourite new feature in Studio 2015. In my opinion, it’s worth buying or upgrading to this version just for AutoCorrect.

Studio has handled editable PDF files since 2011. Now, it can also process scanned PDFs through the Solid Documents engine, which carries out optical character recognition (OCR) and extracts texts from images in the background, before the file is opened as an .sdlxliff in the Editor. 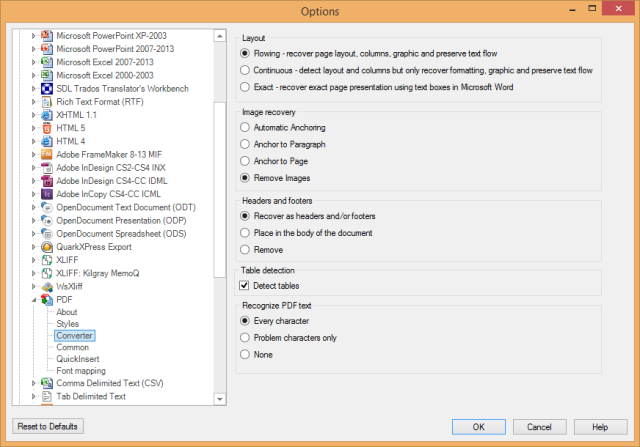 For the Layout option, I recommend Flowing. This is the most basic output you can get with formatting, including correctly formatted bullet points, etc., and it provides a starting point for pre-editing the file in Word (see below).

I remove images, but you may need to keep them and convert them if possible. Headers and footers are best processed as such, although sometimes it’s easier to remove them here and add them by hand in the target Word file.

The options at the bottom of the pane define how Studio will recognise text.

After Studio converts your PDF and opens it in the Editor, the next step is to preview the target file in Word, by clicking Ctrl+shift+P. (Alternatively, you can save the source file at this stage.)

The additional capability to process scanned PDFs is very useful for translators who are just starting out and haven’t built up their full set of tools yet. More experienced translators will probably already be using Abbyy FineReader or other OCR programs that have far more advanced editing and dictionary features.

AutoSuggest (AS) has been around for a long time in Studio. It offers suggestions from a drop-down list as you type, based on translation memories (TMs) that have been processed and converted into AS dictionaries. It also gives you suggestions from termbases, autotext lists and Open Exchange plug-ins. Why is it useful? It saves you typing long phrases, helps jog your memory and ensures consistency.

Just to clarify, you only need a special AutoSuggest license to create an AS dictionary. All other resources, new and old, pop up even if you don’t have an AS license.

Studio 2015 not only offers suggestions from the above resources, but now also mines your TM in real time, leveraging 100% and fuzzy matches, concordance and automated translation providers. The new resources appear in the drop-down list as you type, preceded by the following symbols:

With the introduction of AutoSuggest 2.0, I’ve had to increase the value in Show the suggestions window to 5. I recommend you fine tune this value until it works well for you.

Now, go to File>Options>Editor>AutoSuggest>Translation Memory and Automated Translation and decide which match types to include in AutoSuggest look-up. 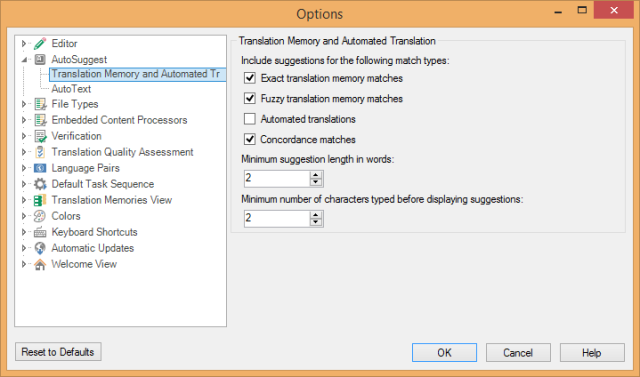 Bear in mind that:

Note that the new look-up resources only work the first time you enter a segment. If you leave the segment and return, the suggestions don’t appear again!

Do you still need an AS dictionary?

It’s quite common to receive an Excel file that has the source text in one column and instructions to translate the content in the next column. Before the bilingual Excel file type was introduced in Studio 2015, you had to copy the source text, paste it in the neighbouring column and then hide the first column. Now, you can specify which column is which.

Under Common (see screenshot below), specify your source and target columns. If you have any comments in the file, specify which column they’re in. Unfortunately, Studio will only add them at a paragraph level in the sdlxliff file, so they won’t be highlighted in the Editor and you’ll only be able to see them in the Comments’ pane. 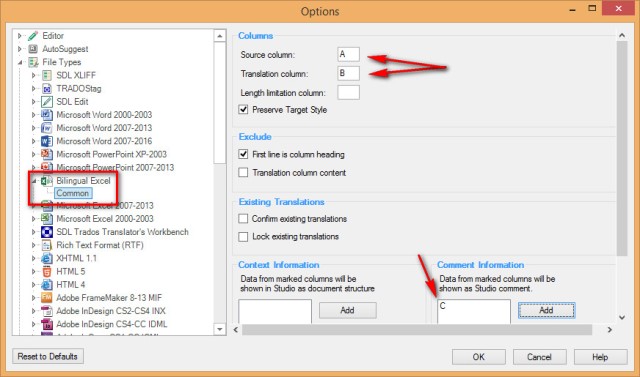 Formatting is preserved at cell level if you disable Preserve Target Style, but formatting of individual words will be ignored. So if you have an Excel file with a lot of bold, italics, etc., I suggest you use the old file type instead, with the workaround mentioned above.

These three apps are now installed automatically with Studio:

The new symbols feature is on the Advanced tab. After you’ve inserted a symbol, it appears alongside the icon on the ribbon. You can add up to 9 quick access symbols to the ribbon this way. (See α and β in the screenshot below.)

Bookmarks are automatically added to the last segment you access in a document and in a project, and you can add your own bookmarks with comments. I find this useful when I translate a long document and check sections of my work before going on. I then add a bookmark and a comment with the word count at that point.

You can also set Studio to re-open your document at the last accessed segment. 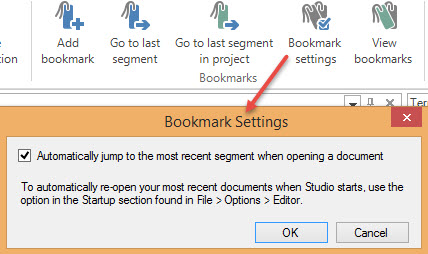 AnyTM will let you use TMs with different languages, different language variants and reversed language direction in the same project. To add these TMs to general options, go to File>Options>Language Pairs>Translation Memory and Automated Translation. In the right-hand pane, click Add and select AnyTM.

With the AnyTM mixed-source language translation button enabled (see screenshot in the Symbols section above), Studio will also detect the language of each source segment and look up translations in the corresponding TM language.

In or out of the box?

Symbols, Bookmarks and AnyTM have been available on the Open Exchange as plug-ins for several years now. So why are they built into Studio now?

First, they’re among the most popular apps because they receive the most downloads. So now, whenever a new Studio version comes out or you change to a new work machine, you don’t have to spend time downloading and installing these apps one by one.

Second, a surprisingly large number of Studio users have never visited the Open Exchange or installed any apps. By bringing the most popular apps into the core product, all users, especially beginners, will be sure to have access to these useful features.

So, although these features aren’t new in Studio 2015, they’re good news for everyone: installation is faster for power users and productivity is improved for new users.

I’m always surprised that translators’ tools aren’t available in scores of languages. After all, developers have access to excellent localisation software and top-notch translators. With Studio 2015, SDL has added two more interface languages, Italian and Russian, and apparently Korean is in the pipeline.

To change your interface language, go to the View tab from any window and select User Interface Language.

I hope this post helps newish users decide whether they want to upgrade to Studio 2015 and encourage complete beginners to take the plunge. Stay posted for a follow-up article on new features for advanced users. Coming soon to a blog near you!