Following on from last week’s blog post on Studio 2015 features for beginners, here are some new features for intermediate and advanced users. At the end of the article you’ll find some tips on upgrading from Studio 2014, plus a final paragraph on what I really think of Studio 2015.

In the previous blog post: New features for beginners

In this blog post: New features for advanced users

You can use this feature to update an SDLXLIFF file with changes made in a target native file. This is useful if you send your translation to a reviewer or if, like me, you carry out a final check on your translation in its native format before delivering to your client. To update the SDLXLIFF, Studio simply aligns the two target versions and imports the changes. The optional manual alignment is a brilliant step in the Retrofit process to make sure everything is where it should be.

How to perform Retrofit:

My take on Retrofit. Retrofit won’t work well on target files with structural changes (added or deleted sentences/paragraphs). However, it’s very useful for long or short files that have been lightly edited.

You can now customise the Quick Access Toolbar and the Ribbon itself.

To customise the ribbon, go to the View tab > Ribbon Customization > Customize Ribbon. 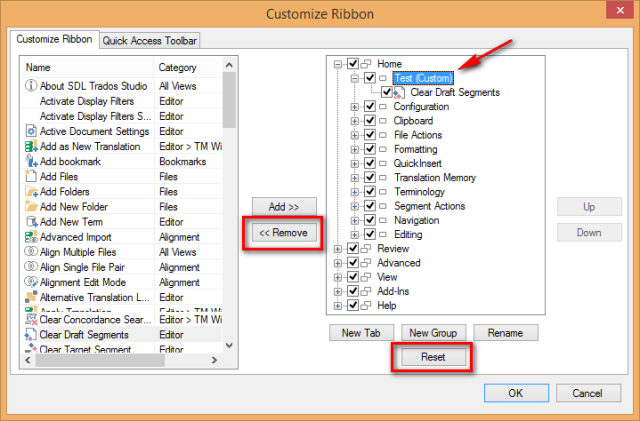 My take on the customisable Ribbon. I’ve got rid of the undo and redo icons in the Quick Access Toolbar (seriously, does anyone really click on these instead of using Ctrl+Z and Ctrl+Y?) and I’ve added Add as new translation instead, because I don’t use this very often, so I can never remember the shortcut for it:

However, I find keyboard shortcuts far quicker than clicking on icons, so I haven’t made any changes to the Ribbon itself. Also, bear in mind that if you ever ask for help or give help yourself, you’ll speak the same language as the other person if you share the same ribbon.

I’m disappointed I can’t copy the Display Filter group on the Review tab to the Home tab. That would have been nice. I’ll have to stick to my Ctrl+F6 shortcut after all.

New interfaces are always controversial. Comments flew back and forth on the beta forum as developers fine-tuned the interface in response to testers’ feedback. I found the bare white background very cold to begin with; the icons looked faint and hard to decipher. But the more familiar the new interface became, the more clunky and garish Studio 2014 seemed. Take, for example, the difference in the draft and confirmed statuses in Studio 2014 and 2015. I much prefer the stylish pencils of 2015 to the chunky crayons of 2014:

Compare the bright colours of 2014

with the clarity of 2105 (click on the images to enlarge them for a fairer comparison):

You can change the white background by going to the View tab > Color Scheme but the choice there is a looming storm (dark gray) or a cloudy day (light gray). Maybe the Color Theme Plugin on the Open Exchange will be updated soon to work with Studio 2015.

My take on the new user interface. I love it! (Does anyone else remember switching from the blue background of Word Perfect to the blank white page of Word many years ago, and wondering if you’d ever get used to it?)

Translation Quality Assessment (TQA) is a new feature in Studio 2015 Professional that provides a method to calculate the quality of a translation by assigning points to categories such as errors, omissions, grammar, spelling and formatting.

As I’m not a project manager I haven’t explored this new feature, but you can read more about it on this page of the Studio Help files.

To test the new file type, go to the File tab > Options >File Types and tick the box next to its name. Then move it up in the list to give it priority, or disable the old .docx file type. The screenshot below shows default settings, before enabling the new file type. 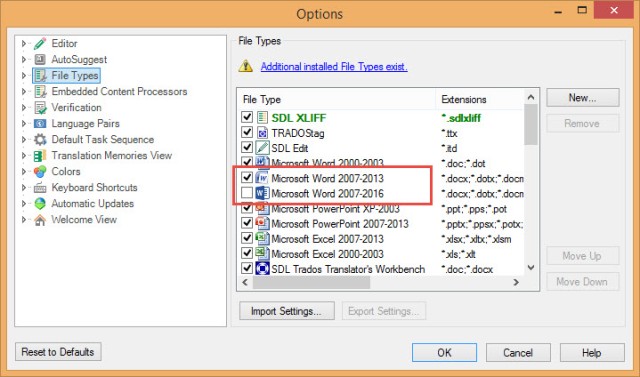 An interesting new option under Common (in the File Types list on the left) is inline tag handling when an error is thrown saving the target file. This makes Studio less fussy about minor tag issues when saving.

Hopefully, in its final version, the new file type will be able to deliver the real-time Word preview that Office Click-to-Run users have been sorely missing for several years now.

For more details on this file type, see the Studio 2015 Release Notes.

Pre-2015, Studio didn’t recognise terms from a termbase in segments that exceeded 250 characters. This limit has now been lifted. Studio 2015 marks terms with a red bracket right through to the end of segments, up to a maximum of 1024 characters.

You can now ignore locked segments in an analysis, which is useful if files have been processed in Studio and certain segments have been locked. To re-run the analysis, go to your target language file view, right click the file(s) and select analysis. In the analysis wizard, check the box below:

If you want to add an alternative translation for a segment that has already been translated in your TM, you used to have to go to the Advanced tab. This option has now been moved to the drop-down list of confirm options on the Home tab:

After listening to users’ feedback on the way Studio 2014 SP2 handling of hyphens affected the word count, SDL has now given us the chance to decide how Studio 2015 counts hyphenated words. To change this setting:

If you decide to upgrade to Studio 2015, how should you go about it? You’ll find all the answers in Paul Filkin’s article on how to upgrade, install and license Studio 2015.

I like to populate new versions with new projects, but if you prefer to move your old projects over, there’s a brand new Open Exchange app to do just that. To learn how to migrate projects, TM lists and customers to Studio 2015, read another of Paul’s blog posts.

The Migration utility hadn’t been developed when Studio 2015 was released. I think it’s very exciting to see SDL respond so proactively to users’ requests and to have the means to implement this type of utility so quickly through the Open Exchange.

In addition to Paul’s fantastic blog, have a read of Pieter Beens’ account of Studio 2015. If you want to go into more detail, check out Nora Díaz’s articles on AutoSuggest and the bilingual Excel file type. And if you want to read all about Studio 2015 in Spanish, then click through to Damián Santilli’s exhaustive article at Tradugeek.

The Studio 2015 Release Notes give more details, including some features that I’ve skipped in these blog posts.

Catching up with the times

To be honest, many of the new features aren’t ground-breaking features in the CAT tool scenario. Retrofit, AutoCorrect, real-time AutoSuggest, scanned PDF capability and Ribbon customisation have been brought in by other tools already (often under different names, but doing almost the same thing under the hood).

A competitive market is good news for translators. SDL is listening to its users; it’s catching up with the times. Studio 2015 may not be trendsetting but it’s bang up-to-date and feature-full. Make room for it in your tool kit!