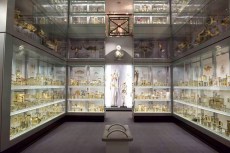 Last November, the ITI Medical & Pharmaceutical Network held a workshop on personalised medicine at the Royal College of Surgeons in London. This is a late follow-up report on the group visit the next day to the Hunterian Museum, which is housed on the same site.

John Hunter (1728-1793) was a Scottish surgeon who started out life as a cabinet maker and then moved to London, where he assisted his brother, William Hunter, an anatomist, in performing dissections and giving anatomy classes. After qualifying as a surgeon, he worked at St Georges Hospital and as an Army surgeon. Later he became Royal Surgeon to King George III. Throughout his life he collected plant and animal species, and human anatomical and pathological specimens. The British government purchased the collection after John Hunter’s death and donated it to the Royal College of Surgeons.

The museum and our guide

Much of the museum is devoted to John Hunter’s collection, but it also has a wealth of dental anatomy and pathology specimens, and surgical instruments. It is sited at Lincoln’s Inn Fields in London and has undergone major renovations over the years. In 1941 the building was bombed and much of the Hunterian Collection was lost. A more recent facelift in 2005 has turned it into a modern, appealing museum for the general public – adults and children alike – and specialist groups such as the ITI Medical & Pharmaceutical Network.

Our guided tour was led by Mr Richard Jeffery, FRCS, who gave us fascinating details about different specimens, explained the stories behind them and answered our questions as he took us from room to room. Our visit was undoubtedly enriched by Mr Jeffery’s knowledgeable contributions as a surgeon himself.

The oldest anatomical specimens in the museum are the artery, nerve and vein systems that were dissected and mounted on human-sized rectangular pine boards in the 1640s. They are known as the Evelyn tables, after their owner, the diarist John Evelyn. The table in the photo here shows the venous circulation. Extraordinary as it may seem now, back in the 17th century it was thought that arteries and veins were unconnected, which explains why the heart is missing from the table.

This room contains 3000 specimens of animal and human anatomy and pathology. One of the prize exhibits is the popliteal aneurysm that Hunter treated in a ground-breaking experiment in 1785. He ligated the femoral artery, applied compression to the aneurysm and then waited for the collateral circulation to expand. The alternative in those days would have been amputation, but this patient survived the innovative surgery and went on to make a full recovery. The photo shows the dried remains of the femoral artery, femoral vein and popliteal aneurysm.

At the rear of the Crystal Gallery, towering over everyone, is Charles Byrne, the Irish Giant. His skeleton measures 2.31 m. Born in 1761 to parents of a normal height, his unexplained gigantism became a curiosity when he travelled to London. When he died a few years later, John Hunter was keen to examine the corpse and add the skeleton to his growing collection. It was not until 1909 when it was discovered that Charles Byrne had suffered a pituitary tumour, as evidenced by the enlarged pituitary fossa. Much more recently, in 2011, DNA testing revealed an AIP gene mutation that fully explained the cause of his gigantism.

The photo at the top of this post shows the Crystal Gallery with Charles Byrne’s skeleton standing tall at the back. (Click the photo to see it in greater detail.) 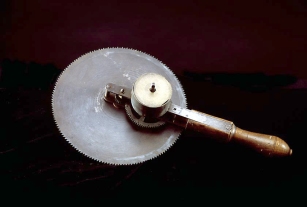 Up on the first floor, Mr Jeffery walked and talked us round the instruments used for the basic surgery that was performed in the 17th to 19th centuries, before the days of anaesthesia and diathermy. Speed was therefore key in these operations, and different techniques were tried and tested with varying degrees of success. The circular clockwork saw, pictured left, was one attempt in about 1850 to perform amputations in a quick, efficient manner. However, the surgeon had no control of stopping the saw once it had been wound up, so it was soon retired from use.

This is just a brief account of a few exhibits. A femur with osteoporosis, a 4-kg adenoma resected from the neck, a humerus with myeloma, quintuple fetuses with a gestational age of five months, and the beginnings of an ectopic pregnancy were other specimens that also caught my eye. I recommend visiting the museum if you have a chance. It’s open Tuesday-Saturday from 10-5, with guided tours on Wednesdays.  It certainly brings medicine to life, in a very dead way.

All the photos are reproduced by courtesy of the Hunterian Museum, Royal College of Surgeons of England.

This entry was posted in Medical and tagged CPD, ITI, medical translation. Bookmark the permalink.

1 Response to The Hunterian Museum