An awkward project made easy with SDL OpenExchange apps

The other day I was asked to translate a 400-word file on asthma with the client’s translation memory (TM) and termbase. Deliverable format: ttx. No big deal, I thought, it shouldn’t take longer than an hour or so.

But when the project arrived in my inbox, I found a source language .doc, a .ttx to work on, five files belonging to a Workbench TM and a bilingual Excel glossary. It would take some time to upgrade the TM to an .sdltm, create a new Multiterm termbase and import the Excel file.

Luckily, there are a couple of OpenExchange apps that helped me start translating almost right away.

First, I used the Glossary Converter by Gerhard Kordmann to convert the Excel glossary to the Multiterm format. It was as simple as dragging the Excel file onto the Glossary Converter icon on my desktop. If you already use this app, you may want to download the latest version, which has a great new feature: you can now convert a termbase to Excel and  text fields will be included. A spreadsheet is a much better way of seeing the whole termbase at a glance and making changes there before converting back to Multiterm. TBX file type is also supported now.

Second, I added the .tmw translation memory to my project here: 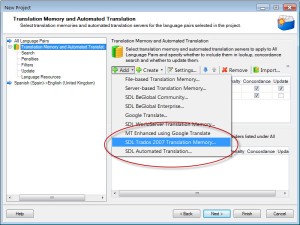 You can download the SDL Trados 2007 Translation Memory Plug-in from SDL OpenExchange. It’ll appear in the drop-down menu pictured above after you’ve installed it. These TMs are read-only, which was fine as my client didn’t want the updated TM delivered. Also, concordance searches are limited to source only, because that’s the way it used to work in Workbench. Another red flag is that numbers are recognised as 100% matches in the 2007 TM and are added as such (using the original number in the TM), without autosubstitution being applied. My workaround is to set up  a penalty for this TM and add it to the project after I’ve pretranslated the source file. Worth bearing in mind.

Of course, if my client hadn’t sent me the .ttx file, I could have created it with the TTX-It app that comes installed with Studio 2011: Start>All programs>SDL>SDL Trados Studio 2011>OpenExchange Apps>SDL TTX-It.

So, with the help of a couple of OpenExchange apps, I managed to turn around what could have been rather a tiresome little project in just under an hour.

This entry was posted in 2. Beyond the Basics, SDL Trados Studio and tagged glossary, Open Exchange, SDL, Studio, Trados. Bookmark the permalink.